My review for Mason’s Winter by C.M. Steele 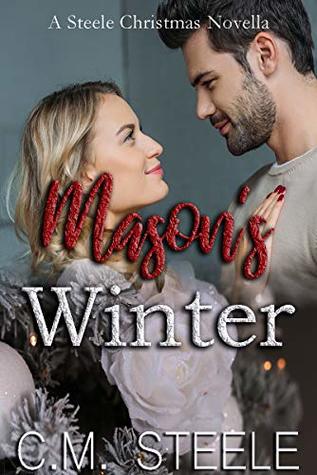 Blurb: Can you fall in love with someone you only can steal a glance or two at?

As soon as Mason Hunt slid his hands around the lovely Winter Snow, he knew that she was special. Weeks of wonder and dreams lead him to finally take his chance when she accidentally crosses his path again.

Can you fall in love with someone when they belong to someone else?

Crashing into Mason nearly sent her to the ground if it wasn’t for his strong hands catching her. She could still feel his touch even weeks later. Winter knows it’s not meant to be and does her best to stay away, but he has other plans.

Winter and Mason fall hard and fast in this holiday romance full of heat.

Mason’s Winter is A Steele Christmas novella and has 18 chapters and an epilogue. It was released on November 17th, 2018. This story is about Mason and Winter.

Starting off we see that Winter is treated like a servant by her stepsister. She graduates in a month and can’t wait to get out of there. Her mom was terrible leaving her there instead of taking her with her.

Her step sister Carissa is a total b*tch just for the record. She tells Winter that Mason is her boyfriend even though that has never been the case.

Winter and Mason meet while he’s at their house for business but Carissa makes it seem like he’s there for her and even though both fall at the first meeting, Winter believes he’s Carissa’s, so she tries to stay away.

Mason isn’t going to let her keep placing distance between them and when he finds out why, he’s pissed. He tells her exactly how it is with Carissa, and Winter is his. Everything moves super fast.

She’s a virgin and he’s been celibate for 3 years. There is some hot sex scenes that were pretty good. This was a great short read. Slight ow drama from the stepsister, but he wasn’t ever with her and it didn’t last long. No separations, no cheating, instalove to the max. Slight pushing away, or rather hiding, but didn’t last long.

Epilogue is a year out, and then 4 years after that. They are happily married with 2 boys and are pregnant with a girl. It doesn’t always flow the greatest, but still a great story. I gave it 4 stars. Thanks for reading.