My review for Zerox by Esther E. Schmidt 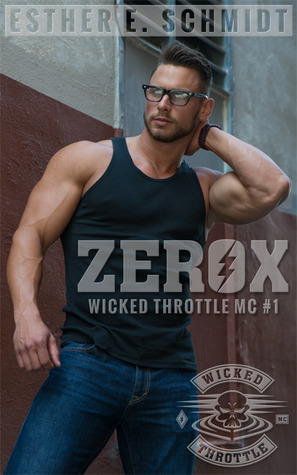 Blurb: There’s a legend amongst members of the Wicked Throttle MC. Something that’s rooted deep into their DNA. The younger generation is starting to believe it when first the VP, and now the Prez, falls. Once a soul finds its other half, there is no going back. Only one option; Love and claim at first sight.

Maci has been keeping a family secret for years, protecting her brothers while carrying the weight of everything on her own. This weight is shifted when a biker doesn’t take no for an answer.

As the President of Wicked Throttle MC, Xerox has always stood up for what’s right. He’s a man that takes action, and that’s exactly what he did when he saw Maci, and her brothers, needed help. With his mind set to clear the town of a drug dealer, who’s after the woman he wants to claim as his own, he’s bound to face complications. Like all things in life; the collision will be harder when confrontation strikes. The question is…will it clear a path for a future, or will the future cease to exist?

Zerox is the 1st of the Wicked Throttle MC series, well it says it’s the first, but you’ll want to read corban 1st as it was a prequel to this one.

So this story is about Maci and Zerox. We see them first in Corban, and they didn’t hit it off very well, but we know they both fell at first sight. So at the end of Corban, we see that Maci is fed up and she lets Zerox have the boys and she actually tells them not to come home, but she was upset.

We’re picking right up from the end of Corban and Zerox is making the boys prospects and putting them with men that he knows will do them good and vice versa.

Maci, she is just so tired from being so stressed. I love that she gives in to Zerox. Everything moves quickly once he claims her and no worries as he claimed her pretty early in the book.

I love a story where I smile most of the way through. I love that Barlow finds his one in this one and we also get his story next.

The gallery goes up in flames and they lose everything and while they are occupied, Maci gets kidnapped and drugged and for the safety gang, she did have her pants around her knees and a man behind her ready to rape her, but they got there in time, so he doesn’t touch her.

It’s a great story with lots of action. Quick read. I love this series, great author. There is no separation, slight push/pull in the beginning and slight om drama, but it all worked out.

Ending isn’t really the end as the story continues in the next, but they are engaged at the end. Hope you check it out. I gave it 5*****Thanks for reading.