My review for Frederick by Esther E. Schmidt 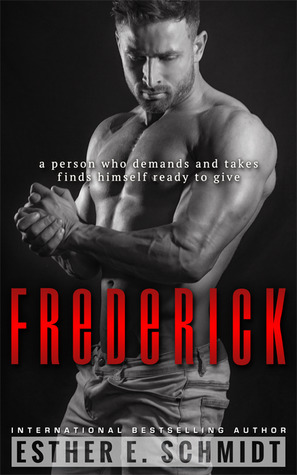 Blurb: Taking the world by force is all Frederick has ever known. Domination is in his blood; which is evident in the boardroom and the bedroom. While stranded on the doorstep of his virtual assistant, Frederick finds himself in new territory. As a person who demands and takes, Frederick now finds himself ready to give.

Taryn has built her walls high with layers and layers of guilt after the deaths of her sister and nephew. Her solitary life, void of most pleasures, is her self-imposed punishment. Working is her only connection to the outside world; that is until her work barges through her front door.

Thrown together in a snowstorm, secrets are uncovered. Will Frederick break through her walls built by guilt? Can Taryn open up and let go? Or will their curiosity bring them to their knees?

I swear, every one of Esther E. Schmidt’s books starts off with a bang and keeps going. Taryn is Frederick’s virtual assistant and the only one who can deal with him cause he’s an ass. He’s stranded on the side of the road with no where to stay but since he’s an ass, she doesn’t want him at her house which ticks him off. So he gets the address and goes anyways.

Taryn doesn’t like to be around people. Her twin and nephew are dead and she blames herself. Her brother in law blames her too and makes sure she feels like crap about it. Her job is the only contact she really has with others. She’s very into Frederick, even when she acts like she doesn’t.

When he sees her, he falls completely. She’s been celibate for 6 years, and she wants him. The sex scenes are so hot. Just pure, hot, rough sex with spanking. I loved it.

He’s definitely not ok with Irwin and he’s not okay with her feeling guilty so he starts changing her thinking. He has a split second of pain when he sees a picture of Irwin and Taryn’s sister and thinks it’s Taryn, but it was over quickly. So the brother in law is the om drama and it’s over quickly.

So this story is really them just getting together and getting her to let go of the past. Such a great story. I absolutely loved it. Great read. Epilogue is 12 years out and they are happily married with twin girls. Perfect all around. Gave it 5 stars. Thanks for reading. You can get this book here: Frederick