My review for Babysitters Club: Alyssa By Jordan Silver 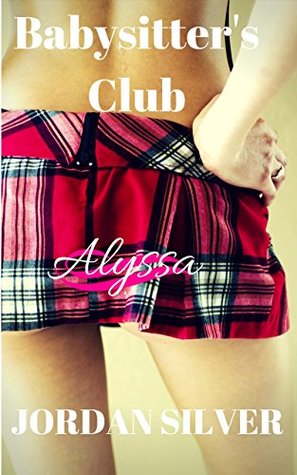 Blurb: You always hear stories about men leaving their wives for the babysitter. Society is quick to rush to judgment on that one, like a lion on a gazelle’s hind quarters. But has anyone ever really stopped to question why? Is it that all men are so weak that they can’t refuse a little sweet on the side, and so they throw away their marriage, children and sometimes half their wealth? How stupid can all these men be if they’re running around being led by their meat? It’s a wonder anything gets done in life if that’s the case. Well I may have been one of those people in the past, one of the ones who questioned just how hard did the old guy put up a fight to deny the little tease etc. But since I’ve become one of the crowd myself I can tell you, things aren’t always what they seem.

Babysitter’s Club: Alyssa has 11 chapters and an epilogue. This is a very short novella about Alyssa and Gage. Shes been in love with him since she was 16, but she was too young and he was married at the time.

He’s divorced now because the ex was caught cheating, but she’s still trying to get him back and she’s not happy that Alyssa is still working for him. She goes off on the both of them. He protects Alyssa.

We get Gage’s point of view and it is awesome. He’s as into her as she is to him. I love that he’s been celibate for 2 ½ years and she’s a virgin.

The ex cause a little bit of a blip, but not between them, she was just trying to hurt them.

Once they get together, they stay together. It’s a great short story. Lots of sex. I love how they felt about each other. No drama besides the ex. Great read. Epilogue is just a few short months and they are happily married and pregnant. I gave it 5 stars. Thanks for reading. Hope you check it out. You can get it here:
Babysitter’s Club Alyssa