My review for Lift by Alexa Riley 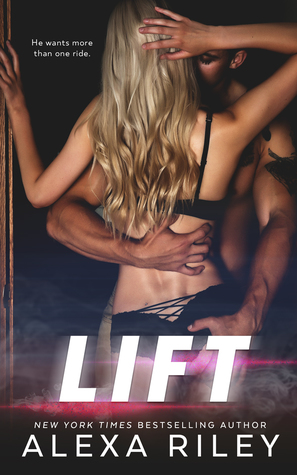 Blurb: Sloan Martinez wasn’t living her best life, but she was doing everything she could to get there. After her parents were arrested for embezzlement she was left penniless, so she borrowed a friend’s car and decided to make some cash as a driver. It wasn’t the safest of jobs, but she didn’t have much choice. It wasn’t all that bad, until he got in one night.

Harris Hill is a workaholic with no time for women. When the person pointing a can of pepper spray in his face turns out to be the woman of his dreams, suddenly things change. He’s obsessed with the young beauty who has stolen his heart, but she’s doing everything she can to build up her walls and keep him out. It’s just too bad he’s got a sledgehammer and he knows how to use it.

Warning: This dirty delight is high-speed love with turns at every corner. There are car puns, surprise ball gowns, and an epilogue so sweet it will crack a tooth! Check your location because we’re coming for you!

Lift has 12 chapters and 2 epilogues. This story is about Harris and Sloan. Instalove at it’s finest.

Starting off we see that Sloan pretty much has nobody. Her parents are in prison, and they didn’t care for her anyways. We see that she’s sleeping on a friend’s couch and that friend lets her use her car to make money by giving people rides.

Harris is a business man and she meets Sloan when he calls for a ride. They don’t start off on the right foot when he thinks she’s a kid, but it’s over quickly.

They are both pretty taken with the other from first look. He doesn’t want to ever be without her. She feels a little weird and worried that he’ll find out about her parents. Everything moves super fast.

Her friend freaks out a little and tells Harris who she is, but he doesn’t care. He’s in love with her. I love that he claims her in front of everyone. Slight om drama in the form of the friends brother who grabs her and says a few things, but Harris takes care of it.

This was just a short, fast read. Very little drama. I loved it. I love that his parents took her in and treated her as if she was theirs. Epilogue is a few months out, then 10 years later. They are happily married with with a boy and a girl and are pregnant. Great read. I give it 4 stars. Thanks for reading. Hope you check it out. You can get the book here: Lift