My review for Cards of Love: Wheel of Fortune by Ella Fox 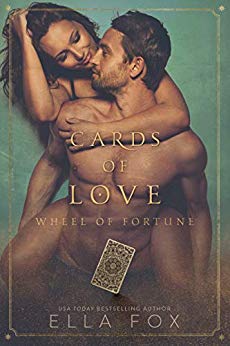 Jackson Howell was tall, dark, handsome- and the single most annoying person I’d ever met. Our fathers were best friends, but that didn’t mean a thing to us. It seemed like he lived to prank me, and I always responded with anger.

On the first day of preschool, he’d dumped a pail of sand down the back of my favorite yellow dress. In tenth grade, he started a rumor that I had a virginity pact with Jesus. It took almost the whole year for someone to tell me why no guys ever looked at me. It wasn’t that I wanted to date anyone, but it would’ve been nice not to be avoided like the plague.

When I moved back to our hometown after college, I was ready to turn over a new leaf where Jackson was concerned. It was time to deal with the feelings I had for him. He wasn’t hard to find. Within hours of my return he was serenading me with Rick Astley’s Never Gonna Give You Up at the Olive Garden.

Later that night I turned over the Wheel of Fortune card… and Madam Aria explained that Jackson Howell was my destiny.

If you enjoy insta-love, happily ever after and reading about a virgin couple, you’re in for a treat with Wheel of Fortune.

Wheel of Fortune is part of the Cards of Love series. It has 7 chapters and an epilogue and is about Jackson and Chloe. They were around each other growing up because their fathers were best friends.

When Jackson was young, Madam Aria told him that Chloe was his soulmate and they’ve found each other each lifetime. He would just have to be patient with her, since she’s been hurt by her mom leaving and was jealous of his mom. With Aria’s advice, Chloe leaves for 2 years so she can see what’s in front of her face, so she can see how much she means to Jackson.

When she comes back everything moves at superspeed. They are both head over heels in love with the other. They’ve only ever kissed each other and they are both virgins, which was pretty great. No other woman or other man drama and all the push/pull happened off page, so we don’t have to wait to long before they actually get together. I thought it was a good read with a couple steamy scenes. Epilogue is just a week out, then 2 years later, they are happily married and pregnant.

Great read. Just a short, to the point story. I gave it 4 stars. Thanks for reading. Hope you check it out. You can get the book here: Cards of Love: Wheel of Fortune