My review for Sofa King Wrong by Madison Faye 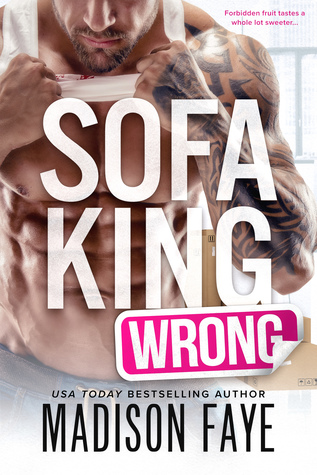 He’s got the perfect tool to get the job done.

This off-limits brat is his to protect.

Life on the street taught me to fight to survive. Prison taught me to endure. I spent years locked up like an animal for protecting the ones I loved. Six damn years without the soft feel of a woman under my rough hands.

Now I work for my buddy’s moving company, Sofa King Movers. A job up in the Hollywood Hills seem like a piece of cake, until it turns out I’m not there to move boxes. I’m there for her.

Alyssa Campo. Hollywood starlet, movie sensation, tabloid drama queen. A barely legal wild-child with a reputation for being a class-A brat. And they want me to be her fucking bodyguard.

She’s off-limits in every possible way – too tempting, too famous, too way-too-fucking-young for me. But when the sassy-mouthed little tease under my watch decides to flaunt my rules, she’s going to learn how firm I can be with bad girls like her.

I know I should keep my distance, but once I’ve had a taste of those forbidden lips and those tempting curves, there’ll be no keeping me from her.

Alyssa’s mine to protect. And mine to claim.

She’s the forbidden fruit. But years behind bars has me hungry.

…And I’m gonna devour her until the juice runs down my chin.

Sofa King Wrong has 10 chapters and an epilogue. It’s about Alyssa and Diesel. Alyssa is a star who has a stalker and she’s known for being a brat. Diesel just got out of prison and he’s moving her stuff in to her house when he’s asked to be her bodyguard till her security is set up.

We do see why he went to prison. He’s just a really great guy.

Everything moves  super fast. They are both into each other at first sight. He’s been celibate since before going to prison. Neither are virgins. She’s a definite brat in the beginning.

There’s some good, hot sex scenes, with a little spanking and daddy talk thrown in.

There’s a couple little instances of drama with her ex and her stalker, with a smidge of his past thrown in, but all the drama was over as quickly as it started.

Short and to the point. I loved it. Epilogue is, I’m guessing, a few months later, doesn’t really specify. They’re together and living together. Thought it was a great read. With there was more of an epilogue, but still a great read. I gave it 4 stars. Thanks for reading! You can get the book here: Sofa King Wrong