My review for A Bride for Christmas by M.K.Moore 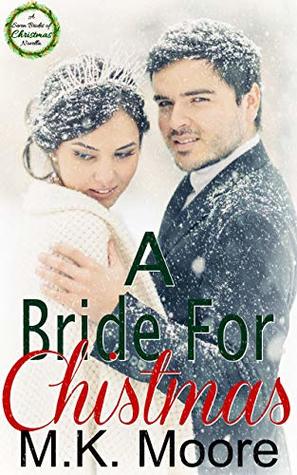 Blurb: Josiah Abernathy needs a wife in order to inherit Abernathy Aeronautics. He has no prospects and this needs to be done quickly. Out of desperation, he hires Delilah to find him a wife, sight unseen.

Matilda is all alone in the city for the first time. A chance encounter with everyone’s favorite matchmaker and her whole life changes.

A fight on the steps of the Fulton County Courthouse, followed by a quickie wedding, begins the naughty happily ever after of these two.

This MK Instalove promises a safe and magical HEA, with lots of steamy, sometimes debauched love scenes. This holiday novella is over the top, so be warned.

A Bride for Christmas is the 2nd in the Seven Brides of Christmas series. Very short story with 8 chapters and 2 epilogues. My favorite stories are under 100 pages, just so you know.

This story is about Josiah and Matilda.

We start off with Josiah going to a matchmaking service cause he needs a wife before his father’s funeral or he loses the business. He tells Delilah that he doesn’t need a love match. He’s been celibate for years and he plans on being faithful to his wife, which I thought was pretty great, since these are just his thoughts. She’s a virgin.

Everything moves super fast and it is super short. The first meet isn’t the greatest as he’s short and abrupt, but he wasn’t expecting Tilly, and they both fell head first. There’s a few steamy bits that were good. Some parts didn’t flow as well as others, but the storyline was good.

Slight ow drama in the form of his father’s mistress who wants the same deal with him as she had with his father, but that was put to rest quickly. Great read. No separations, very little drama. Epilogue is 12 years out, they are happily married with 8 kids. Short, to the point story. I gave it 4 stars. Thanks for reading. Hope you check it out. You can get the book here: A Bride For Christmas (Seven Brides of Christmas Book 2)