My review for Taking What He Wants by Jordan Silver 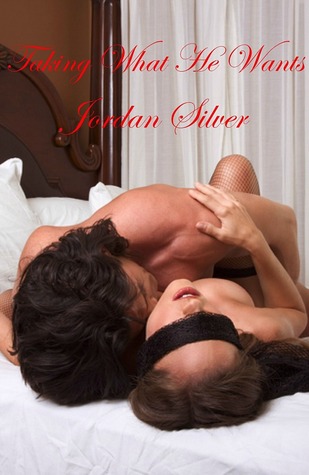 Blurb: Chase Thornton is out for blood when he learns of his fiancé’s hidden agenda. Filled with rage and the pent up sexual energy that seems to peak only when in the presence of his innocent soon to be ex sister in law, Chase sets his sights on a new mission. To destroy the wayward Celine, and enrapture her younger sister Delia in this tale of family intrigue and revenge where one man’s thirst for vengeance just might lead him down the road to his salvation.

With His Wants, it’s just showing their beginning. Chase was actually engaged to Delia’s sister and yes he slept with her. He found out some things about her so he decides he wants revenge, so Celine thinks they are still engaged even though there is no kissing and no more sex for months, but Chase is done, just pretending until he gets the revenge he wants.

Delia has the hots for Chase, and he has noticed her too, but at first he just wants to use her to hurt Celine. So this first part is just the first time for them. Just a hot sex scene, where he doesn’t have her permission, but he’s taking her anyways. It just moves on into the next.

Taking What He Wants starts after they’ve been sneaking around for 2 months. So there is lots of hot, rough sex scenes, with a little daddy talk and spanking thrown in.

Delia doesn’t know that Chase has no plans on marrying Celine. We find out that Chase found out that Celine has been sleeping with others and is only marrying him for his money, so that’s why he’s out for revenge. He started out using Delia as part of his revenge, but then he fell for her, but she doesn’t know it.

Delia’s family is terrible to her. He does get his revenge and Delia finds out just how much she means to Chase. They get married right away and he tells her that she’s pregnant. They are very happy together and he’s so good to her.

Delia does get hurt when she goes to the grocery store, and it just makes Chase continue on carrying out his revenge on all who had a part in hurting her.

While on his revenge, it makes her parents mad that he’s taking everything of theirs. Her mother tells Chase lies that Celine is Delia’s mother and she’s a product of statutory rape from Chase’s godfather. Delia overhears and it destroys her. Chase knows his godfather Vito couldn’t have done that.

Chase makes sure they get all the answers needed for Delia. He uncovers the truth, there was no rape, Celine is not her mom and yes,Vito is her father. So, she’s found a father who loves her unconditionally and uncles as well. So, it all worked great in the end. She finally has a family who treats her as such.

Vito and Chase get their revenge for Delia and they didn’t even have to touch anyone.

I loved this one. It’s one of my go to reads. Great read. Epilogue is just a few months later, they are happily married and have their baby girl.

I gave it 5 out of 5 stars. I loved it and can’t give it less than perfect stars. No judging. Thanks for reading. Hope you check it out. This is one that I reread often. You can get the book here: Taking What He Wants

His Wants, A Prequel Novella to Taking What He Wants