My Review for Biker’s Baby Girl by Jordan Silver 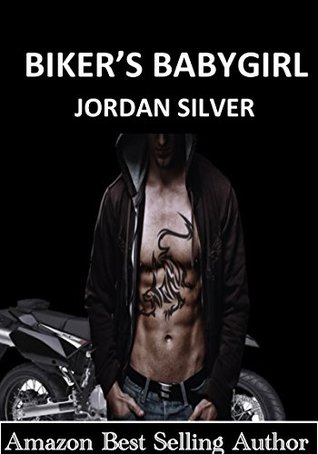 Blurb: Creed is an ex sharpshooter turned bike crew President, with a rough upbringing and the scars to prove it. Nine years ago an old drunk offered him his twelve-year-old daughter for his next pint. Knowing that as fucked up as he was he was still the kid’s best bet, he took the deal. He left her with an aunt he thought he could trust because Uncle Sam owned his ass for the next little while, and he had no choice.

Then his babygirl turned eighteen and shit went south, literally. He knew he had to stay the fuck away from her or she’d be under him before she could blink, but he made a deal with himself.

When his babygirl hit twenty-one he was taking her no matter what.

Her birthday was three days away and though he’d kept his distance for the last two and a half years he’s been keeping tabs on her. It was time to collect.

Biker’s Baby Girl has 20 chapters and an epilogue.I have to say that this is one that I reread often. I will say that if you don’t like reading rough sex scenes and punishments, this story isn’t for you. I’m a huge fan of this author. This story is about Creed and Jessie.

We start off with him wanting her for the last 2 ½ years. He wanted to wait till she turned 21 to claim her and that’s in 3 days at the start. He’s only been celibate for about 6 months since he put his piercings in.

She’s been in love with him for years, but doesn’t know that he’s coming for her and she’ll get what she wants as he’s all in.

She was sold to Creed by her father when she was younger and he gave her to her aunt to take care of.All the wanting and missing him was done off page, thankfully. We do see a few flashbacks, but not many, not enough to ruin the story. I think it enhances the story actually.

So at the start, he gets a call from a trusted friend and he moves up his timeline to get her by 3 days. He is pissed.

You can definitely feel the connection between them, even with them not seeing each other for a couple of years.  She’s been mistreated for years, but he hasn’t believed it. He’s believed her aunt over her and he’s beginning to regret that, since getting a call from someone he trusted.

He’s definitely feeling guilty when he finds out what her aunt’s boyfriend has been up to, with going into her room.

Everything moves fast as he knows she’s his and he’s going to make her see that as well, which won’t take anything at all as she’s head over heels for him. So he gets her and takes her back to his place, with some of the sheep that he’s slept with still there.

There is of course a couple instances of other woman drama, both from women he’d been with once before. One he hugged, because they were friends before and he sees how she’s let herself go and he didn’t think of how Jessie would feel. It hurts her and she loses her mind for a minute. She sees it as him choosing the other woman just like he chose her aunt over her, so it messes with her for a minute, and she handles it badly which pisses him off and he punishes her. Doesn’t last long. The only other drama was him being shown her picture in a trafficking book along with Lyon’s daughter.

Lots of hot, rough sex scenes that were pretty awesome. They are married at the end. I loved it. I’m a huge fan of this author and I love her alphas. Great read. No separation once they are together. I loved Creed. This is one that I reread often. I gave it 4 out of 5 stars.  Thanks for reading. Hope you check it out. You can get the book here: Biker’s Baby Girl