Review: Into the Fire by Leah Sharelle 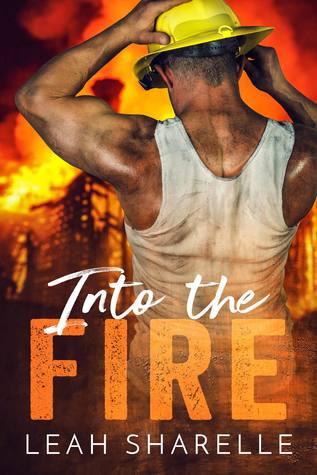 Her parents were dead, and she was catapulted into a full-blown adult whether she was ready or not.

Without support from her boyfriend, Lake found herself a guardian to her siblings and the owner of the family’s fledging bakery, not to mention a house that was falling down around their ears.

Life as she knew it was changed forever. Especially when a hunky hose man walked into her bakery asking for catering … and a kiss.

All of a sudden her sexy daydreams of firemen with kittens and puppies became very real.

Carson Hogan had a lot on his plate. His ex-wife was spending money faster than he could earn it, his two daughters were out of control, and to his utter shock, becoming too much like their mother. And he was doing his best to protect his son from the crazy women in his life. Add a stressful but fulfilling job, he wasn’t looking for anything else.

At least he thought he wasn’t. Until he entered the bakery across the street to find a silver eyed blonde sprite begging for sex … sort of.

Love blossoms quickly between the two but with all the outside interferences promising to ruin their new found love, will they risk everything and walk into the fire and claim their happily ever after?

Into the Fire is the 1st in the new series Firemen Do It Better. I received this as an ARC for an honest review. I do have to admit that Leah Sharelle is one of my favorite authors. Her Wounded Souls series was by far one of my favorites. The way she writes is pretty awesome. You can go in from the beginning thinking you aren’t going to like the main character, and somehow she turns it around for you to love that character. Very excited for a new series.

This story has 22 chapters and an epilogue and is about Carson and Lake.

We meet Lake who is taking care of her siblings after their parents died, she’s also trying to take care of their bakery.

Carson, a firefighter, has 3 kids with an ex-wife who loves his money.

I have to say, Lake and Carson’s first meet was freaking hot. Insta-love to the max, I think. Sparks flying. Great writing when you can actually feel what the characters are feeling. Just perfect. They are pretty perfect together. They are only together for a week and he tells her he loves her. She went silent on him for 3 days, but with her losses, it was understandable.

His son loves Lake, but his daughters and ex-wife, not so much. They cause a lot of problems, but not any that hurt Carson and Lake’s relationship. They were both all in from the very start and nothing was going to tear them apart.

This story, I worried that it wouldn’t be as good as her first series, but oh my goodness, it was awesome and I loved it. It was hot with lots of steamy sex. I never skimmed, it kept me interested from start to finish. Loved it. Insta-love/insta-everything, no separations-other than the 3 days in the beginning, but I don’t count that as they weren’t broken up, no cheating-the ex-wife cheated on Carson, no om drama. Can’t wait for the next out of Leah Sharelle.

Epilogue is 5 months out, they are happily married and pregnant with a son. I love when we see further out with the epilogues, but I know this author and like with the previous series, I’m sure we will see this couple on down the road.

The way she writes, it’s my favorite. I love a series that continues from one and we see the couples in each and not just as a flashback, but as part of the story. I love it. I love this author and can’t wait to see what she does next. No way can I give this less than 5 out of 5 stars! Perfect all around.Thanks for reading. Hope you check it out. You can get it on KU: Into The Fire (Firemen Do It Better)

If you don’t have it, you can get a free trial: https://amzn.to/2YjWSlN