Review: Under Siege by Aria Cole 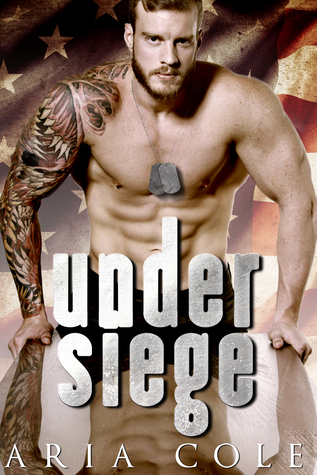 Blurb:What happens when ten-foot-tall and bulletproof asks you to spend thirty days alone with him?

Tinsley Abernathy never thought she’d have to ask herself that question. And Ash Ford isn’t just any run-of-the-mill, drop-dead-gorgeous stranger, he’s the soldier she’s been exchanging letters with every week for the last three years. And now he’s back in town. And he’s ready to meet her.

After all, Ash has a proposition Tinsley would be crazy to refuse….

Warning: Ash is one sticky, sweet, military muscle-man in camo cargos. He’s set his sights on one woman only, and he won’t stop until her heart is Under Siege.

P.S. I firmly believe that double the smut is double the fun, so to celebrate the holidays I’m including one of my favorite stories, Stepbrother Anonymous, FREE in the back of Under Siege! Happy Reading + Happy Holidays!! xoxo Aria

Under Siege has 7 chapters and 2 epilogues and is about Ash and Tinsley.

Ash is in the military and they have been writing each other for 3 years. They are both in love with the other and he’s home and wants to see her. They’ve never seen each other, and she’s a little insecure in herself.

She’s bumps into him and there are definite sparks. She’s a little nervous thinking she couldn’t possibly be what he wants, but he asks her for 30 days and we know he’s not letting her go after the 30 days.

He’s all in 100%. She’s a virgin and he’s been celibate for years. Everything moves super fast.

Lots of steamy scenes. Little past drama, but it was over in a split second. This was just a short to the point story. No separations once they are together, no others after they start talking. Great read.

Epilogue is 30 days out, then 4 years later, they are happily married with 2 boys. Great read. Love stories with steamy scenes.

I gave it 5 out of 5 stars.  Thanks for reading. Hope you check it out. You can get it on KU: Under Siege (Blue Collar ALPHA Males)

If you don’t have KU, you can get a free trial: https://amzn.to/2YjWSlN

Tagged as: Book Review, HEA, No Cheating, No cheating between MCs, No OW/OM Drama, No Separations, No sex scenes with ow/om, Steamy