Review: Until Mani by Rochelle Paige 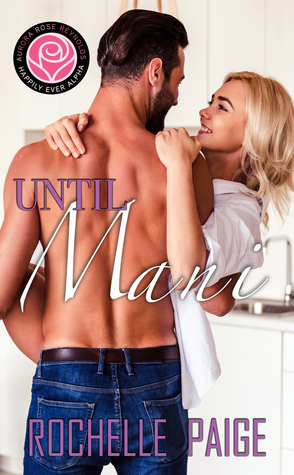 Blurb: Bryson’s Steakhouse is the go-to place for the Mayson family to celebrate all their big occasions. As its owner, Mani has had a front row seat to the second generation of Maysons finding their boom. But he’s always on the outside looking in, and he doubts it’ll ever be his turn…until Vivian comes crashing into his life.

Vivian doesn’t think she has a lot in common with Mani. He owns a fancy restaurant, and she’s having a hard time finding a job. She’s searching for a cheap place to rent, and he has a beautiful house. Fast food drive-throughs are more her style, and Mani is all about gourmet.

To Mani, these aren’t differences. They’re opportunities to give Vivian everything she deserves.

Until Mani is part of the Happily Ever Alpha World, inspired by the Until Series by Aurora Rose Reynolds.

Until Mani is part of the Happily Ever Alpha World series. Each can be read as a standalone. I’m a huge fan of Aurora Rose Reynolds and her Until series. I love the “Boom”!

This one has 12 chapters and 2 epilogues and is about Vivian and Mani. I love that we get to see a little bit of the Maysen family.

When these to see each other, sparks fly. She was chased away from her home and when she tells Mani about it, he’s ticked and wants to make sure she’s protected. He’s all in from first look.

Neither are virgins. Doesn’t say when the last time they were with anyone, which I liked.

They are adorable together. I loved it. A few steamy scenes. No push/pull. Only a blip of drama when her past in the form of her boss’s wife shows up, but it was over quickly.

Great read. Great story. Great writing. No separations, no ow/om drama. No cheating, but her boss’s wife thought she slept with her husband and caused problems for her.

Epilogue is a few years down the road, they are happily married with 2 boys. I love these stories where the men see their one and that’s all they see.

I gave it 4 out of 5 stars.  Thanks for reading. Hope you check it out.  You can get it on your Kindle: Until Mani: Happily Ever Alpha World

If you don’t have KU, you can get a free trial: https://amzn.to/2YjWSlN