Review: She’s All Mine by Ella Goode 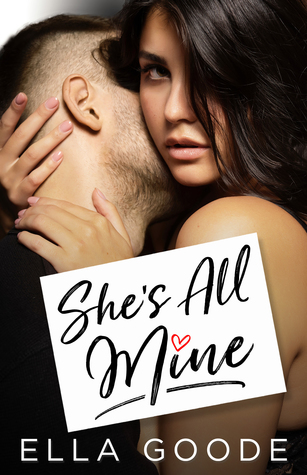 Blurb: Erika grew up with a set of expectations that she could never meet. She wasn’t smart enough for her dad and she wasn’t a good enough dancer for her mom. At college, she’s retreated into a shell—dancing at night and avoiding people. The one person she can’t escape is a local boxer named Tank. He’s determined to show her that everything she’s dreamed of can be hers if she would only see herself through his eyes.

Tank believed boxing and babes didn’t mix until he met Erika. He can’t get enough of the the shy girl who rules his every thought, but she’s wary of relationships. This is one fight he can’t lose.

She’s all Mine has 19 chapters and an epilogue and is about Tank and Ericka.

Tank is a boxer and an Audley twin asks him to walk Ericka home. Audley is from Three of Us and Belong Together, which I have not read.

He is so funny, he doesn’t want to be around women as they are a distraction. I couldn’t help but laugh.

I think it was a definite case of insta connection as he’s all in from first look. They are so adorable together.

I have to say that I love a story that I smile most of the way through.

She avoids him for a few days because of a slight misunderstanding, but it’s before they are together.

No real drama other than her parents for a split second. He’s very protective of her, it was really cute. I loved it. Very steamy, no separations after they get together, no ow/om drama, dual virgins. Great read.

Epilogue is a few years out, just doesn’t say how many. They have been foster parents to many kids and they have a daughter and a foster son. I loved it.