Review: His Hostage by Alexa Riley 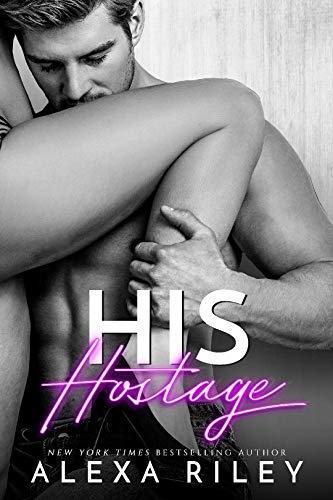 Blurb: Jules is running from her old life and the man who wants to lock her up and abuse her. She’s finally escaped, but she’s run right into another mountain of trouble. She agrees to do one last job for her new boss and then she’s out. But once again she’s caught in the middle when she’s taken hostage by a hot stranger named Cooper.

Cooper is robbing from the rich to give back to his community and make the town he grew up in a safer place. He and his band of brothers are stealing every dime from the local mob, but when it’s time to grab the bag, he gets more than he bargained for.

Warning: If being held against your will with this hot alpha is a crime, then lock me up! These two get cozy while on the run and burn up the road. Grab it now and lock it down… We promise you won’t be disappointed.

I’m a huge fan of these authors. I love the steamy scenes-favorite parts.

His Hostage has 15 chapters and 2 epilogues and is about Cooper and Jules.

We meet Jules, who is on the run from an abusive ex. She’s realizing the job she has is not good. Her boss knows the truth about her being on the run and he uses that thinking it will keep her in line.

Cooper and his brothers are trying to take back money from her boss to give back to their community. He meets Jules when they go to take the money and he decides to take her with him.

He’s all in from the very beginning. Jules, she doesn’t push away, she’s just more leery as she’s scared to trust.

She’s a virgin and we don’t hear anything about his past. He’s so sweet to her. Few steamy scenes.

She does do something stupid, but Cooper gets to her in time. I loved this story. Not as steamy as some, but it was still a great read.

No separations, no cheating, no ow drama, the only om drama was a split second and he was the bad guy. Great story.

Epilogue is a year out, then 15 years later, they are happily married with a son and 3 daughters.

I really loved it. I love the closeness of all the brothers.