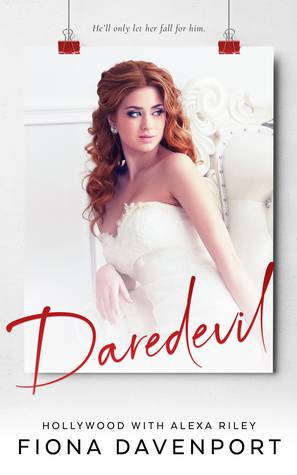 Blurb: Ainsley Carruthers has never been afraid to take risks. When she’s offered a stunt role in a movie, she jumps at the chance to try something new. But she might be taking more of a risk than she realizes when she falls for a sexy man with a dark past.

Remington Vaughn has fought hard to conquer his demons and come out on top. When he’s given a chance to rebuild his Hollywood career, he doesn’t expect to find a new addiction…Ainsley.

Warning: It’s not just the hero who’s over-the-top in this one; the heroine is too—literally! But that just means more yumminess for you because she’s an aerial silks performer, and her flexibility meant we could get super creative. Be prepared for this Hollywood with Alexa Riley story to leave you wanting more.

Daredevil is part of the Hollywood with Alexa Riley series. Each can be read as a standalone, but I do recommend reading the others. Has 10 chapters and 2 epilogues and is about Rem and Ainsley.

We’ve met Rem in a previous book and so we know going in that he was a child star and got into trouble even though he’s been clean for years, his career is just getting back on track.

They meet when she’s auditioning, even though she actually already has the job. Definitely instalove for the both of them.

Rem has been celibate for 4 years and Ainsley is a virgin.

Everything moves super fast. Steam happens in the 2nd half of the story. Very good read, I thought. I loved them both, but Rem, he was just awesome. He had one speed and one speed only. I loved it.

No separations, no ow/om drama, no cheating. Epilogue is a year out, then 5 years later. They are happily married with 2 kids and are pregnant.

Great read. I gave it 4 out of 5 stars.  Thanks for reading. Hope you check it out.