Review: Make Me Yours by Ella Goode 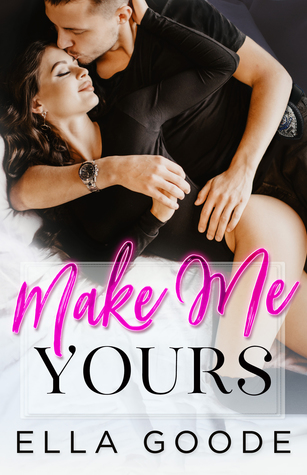 Blurb: Everyone knows they belong together…except them.

Daphne Davidson has a problem. She broke up with her boyfriend a month ago and she still hasn’t found a date to her sister’s upcoming wedding. If she goes solo, she’ll be inundated with sly comments about how she can’t keep a man. They aren’t wrong. She can’t keep a man because she’s never dated the one she really loves—her best friend, Jack Reese.

Detective Jack Reese has been secretly in love with Daphne since he knew what love was. Yet she’s never shown any interest in him and he decided being friends was better than nothing. When he finds out that she’s diving into the pit of vipers she calls a family, he’s determined to protect her. Going undercover as Daphne’s date means holding her hand, kissing her lips, and pretending to be in love. The latter part isn’t hard. What’s tough is resisting the urge to claim her.

Make Me Yours has 7 chapters and is about Daphne and Jack.

They’re best friends and have been in love with the other for many years, but neither wanted to ruin their friendship.

They’ve both dated others, but they are both virgins.

Things change when Jack offers to pretend to be her date for her sister’s wedding. Her family, they are awful to her. Jack is there to protect her.

They don’t tell each other how they feel until past the halfway point and no steam till the last chapter, but it was still a good read. I loved it.

Om drama in the form of her ex, but it was over quickly. No ow drama, dual virgins, no separations and we don’t have to wait the years for them to get together.

I wish they had voiced their feelings a little earlier on and I wish there was an epilogue to see where they are at.

At the end, they are engaged.