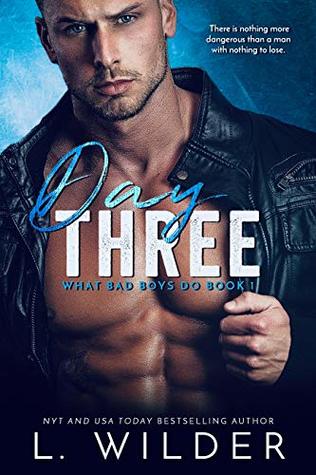 Blurb: There’s nothing more dangerous than a man with nothing to lose.

Our lives are defined by moments, especially the ones we never see coming. For me, that moment came when I was given the opportunity to take from those who’d taken from me.

I became a hitman- killing mob bosses, drug lords and everything in between. With judges in their pockets, these men were untouchable by everyone–except me. With every hit, my plan was always the same:

Day one- receive the target.

On day three of my latest assignment, everything changed. The moment I saw her, I knew she was different from the others. Madison Brooks wasn’t a hardened criminal with blood on her hands. She was innocent, untouched by my world, and undeniably beautiful.

On day three, I couldn’t get her out of my head. I kept imagining what it would be like to hold her, touch her, and claim her as mine.

Many readers were introduced to the sexy, brooding recluse, Jasper Nichols, in Murphy: Satan’s Fury- Memphis. Day Three is a new standalone romance novel with no cheating, lots of wild twists and turns, and a swoon-worthy HEA with no cliffhanger.

I received an ARC for an honest review.

Day Three is the 1st in the What Bad Boys Do series. Has 19 chapters and an epilogue and is about Jasper and Madison.

In the prologue, we see that Jasper has had a hard life. He’s dealing with PTSD and his girlfriend was killed right in front of him.

He turns into an assassin and Madison is his next assignment.

She’s such a sweet girl, he doesn’t understand why he’s been hired to kill her.

They both feel a connection when they meet. I love that they took the time to get to know each other. Not a lot of time, but some.

The only drama is finding who wants her dead and dealing with that. I loved that there was no drama in their relationship.

This story definitely kept me interested. It started off kind of slow, but just keep reading, it does speed up. I do have to say that I thought someone was trying to kill her for a totally different reason than was actually the case, up until we’re actually told the reason. Total shocker for me, but in a good way.

Great read. I loved it. There were a few steamy scenes. No cheating between mcs-someone else did, no separations, no ow/om drama at all. Lots of violence.

I love that we know and can feel that she is his one. I always worry with a dead girlfriend/spouse, cause I want the heroine to be loved more. I love that even with his past, he never pushed her away. He was all in from the beginning. Such a great read.

Epilogue is 6 months out. They get engaged at the end. I really wish that we were shown further out, but I do believe will see them later in the other books from the series. I gave it 4 out of 5 stars.  Thanks for reading. Hope you check it out.