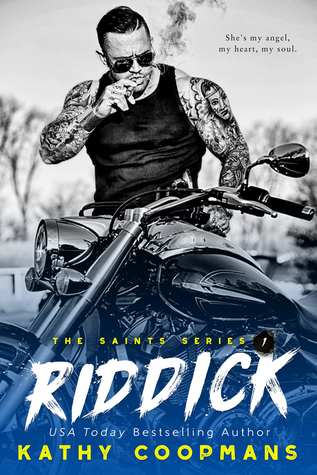 Blurb: From USA Today Best Selling Author comes the first book in a series of standalone’s: The Saints Series.

She told me Heaven would knock on my door one day. That I would be swept away from the hell I lived in. She was right about one thing and so wrong about the other. Heaven came in the form of an angel just like she said. Beautiful. Perfect. An angel. And then. My life became hell. She disappeared. Vanished. I left. Went to war. Killed. All for her. Every face was the man who took her. Every dream filled with her. For twelve years I existed in hell. Breathed in the fires from down below. Until her, the woman on the beach outside of my home. Captivating. Enchanting. Mesmerizing. It couldn’t be my Cora, my angel, my heaven on earth. She was dead. Wasn’t she?

I’m reading this in the Then There Was You: A Single Parent Collection. It releases Aug. 2019.

Riddick is the 1st in The Saints series. It has 22 chapters and an epilogue and is about Cora and Riddick.

I have to say that this starts off with a bang and just gets better. Very emotional in the beginning.

Riddick lost his mom to cancer when he was very young and his father is a Hell’s Angel.

Cora’s family are gang members and we do see her beaten.

They fall in love win they are very young, but they have to hide it from her brother. He finds out and beats the crap out of her and makes her leave town. She has to protect her baby and she believes her brother killed Riddick.

12 years down the road and they find each other again. Thankfully, we don’t have to wait half the book for them to find each other. Both thought the other was dead.

Both have never forgotten or quit loving the other, even with believing the other is dead. They both have been with others as they thought the other was dead, so it didn’t bother me.

There’s not a doubt how much these 2 love each other. You can definitely feel the emotions, which I loved.

Riddick, he does not hesitate at all in showing his emotions. Once they come in contact, they are both all in 100%.

This was an amazing story. I absolutely loved it. I really love a story when you can actually feel what the characters are feeling, and they definitely loved the other very much.

The only drama was from their past. I do want to mention that there was talk of rape, but it never happened. Parts were very violent, descriptive.

This was a first by this author for me and I will definitely be reading more. 22 chapters with 300 pages seems like a lot, but it actually flows so well that it reads very fast. There was not one second that I skimmed. Very good read.

Epilogue is only a week later. So that’s the only negative. I like seeing further out, but I’m hoping that we’ll seem them in the rest of the series, which I do plan on getting to eventually.

Great read. I loved it. Kept me interested all the way through. I gave it 4 out of 5 stars. Thanks for reading. Hope you check it out.