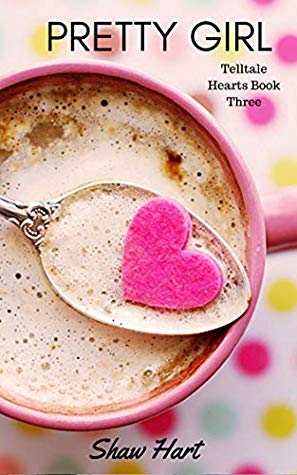 Blurb: Bianca St. Pierre has a problem. An ex-boyfriend who threw her aside in college has left her scared of commitment. Instead of getting serious with someone, she keeps things light with a one date only rule. A disastrous first date with one guy though leaves her with a stalker and she reaches out to her friend for help. Enter Bryson Thatcher.

Bryson Thatcher has a problem. The girl that he’s supposed to be protecting is the one girl that has ever been able to stir something deep within him. He knows that she’s been burned in the past but he would never throw hurt her. Now if he could just prove that to her. He just needs to come up with a way to show her what she means to him. To show her that she’s more than just a pretty girl.

*Warning! This book alpha is over-the-top, head over heels in love with his girl. If you’re looking for a steamy insta-love story then this book is for you!

Pretty Girl is the 3rd in the Telltale Hearts series. Has 14 chapters with the last 2 being the epilogues and is about Bryson and Bianca.

They meet when Bryson is hired to protect her from her stalker. They both fall instantly, but with her past, she’s scared to take a chance.

There is no push/pull really. Steam hits later in the story, but it’s still very interesting.

Another great read, I thought. He’s very protective of her. I loved them together. I thought, with the blurb, that there would be a lot of pushing away by Bianca, but happy to say that that wasn’t the case at all.

No cheating, no ow drama, om drama-just her stalker and not much of that, no separations.

Epilogue is a year out, then 6 years later. They are happily married with a son and pregnant. Great read. I loved it. I gave it 4 out of 5 stars. Thanks for reading.