Review: Stopping at Nothing by Shaw Hart 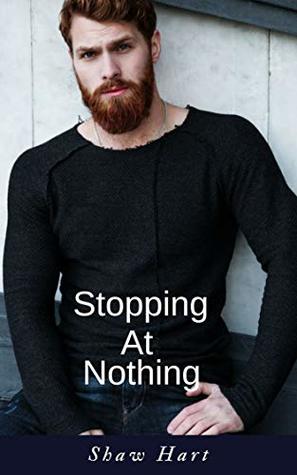 Blurb: Auden Glaser is always the new girl. With a mother who jumps from boyfriend to boyfriend and town to town she’s been forced to tag along with her. Now that’s she’s turned eighteen she’s hoping that this will be the last town she moves too. She just wants to graduate high school and find a job and an apartment. Then she meets Ryker.

Ryker Holden is the rich kid. He’s the son of wealthy oil barons. With parents who would rather traipse around Europe than be parents, he’s left alone far too much. Then he meets Auden and senses something in her that chases the lonliness away. He knows as soon as he sees her that she’s the one and he’s stopping at nothing to make her his.

Stopping at Nothing has 11 chapters and is about Auden and Ryker.

Ryker is very lonely as most people just want to be around him because of who he is and his parents are always out of town.

Auden is lonely also and always moving because her mom.

They both just want to get out.

Definite case of instalove as soon as they see each other. Everything moves fast, but not. Like they get to know each other which is great. Slight ow drama from some girls who are jealous, but it’s not really an issue.

She’s a virgin and nothing is said about him either way. I want to say that he is one too, but it’s just my opinion.

It was a good story. Steamy, I loved it. I do wish for an epilogue. They do get engaged at the end, so that was great. Just wish there was an epilogue.

I loved Ryker, he was just so sweet.

No cheating no real ow drama, no om drama, no separations, no epilogue. I gave it 4 out of 5 stars.  Thanks for reading. Hope you check it out.