Review: Then There Was You: A Single Parent Collection 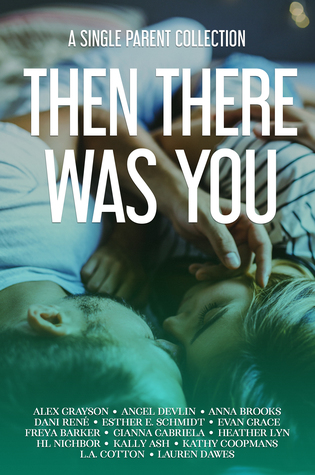 Blurb: AVAILABLE FOR A LIMITED TIME: With stories from 14 unbelievably talented authors. Read on for a taste of the stories you’ll find within!

Back to Life by Dani René

Both having been heartbroken in very different ways, Kayla and Caleb find themselves in a very unlikely situation where they can’t deny the electricity coursing between them. Can love really bring them back to life?

Boss of Me by Angel Devlin

Single dad Jude’s icy exterior keeps women at a safe distance; but fiery Pippa could be about to start a thaw…

Some issues cut deep; they are hard to face and even harder to find a solution for.

Fighting for Us by Heather Lyn

She rescued me when I didn’t even know I needed saving. But now lives are on the line, and we might lose our forever, before we even get the chance to start.

She was never supposed to happen, and her baby girl sure as hell wasn’t part of my plans.

A mate’s death. A rogue wolf. A new life.

Just Because of You by Gianna Gabriela

Their worlds collide and an unlikely friendship forms, but will they continue to fight the pull for something more or give into the pull and take a chance at love?

Do you believe in heaven on earth? I did until one day, she vanished.

One night changed everything.

Tempt Me by Kally Ash

Temptation comes in many forms. Can Gianna or Max resist?

It’s the best day of his life–the worst of hers–when one moment in time leaves their paths unavoidably connected by the single heart beating between them.

Whispered Prayers of a Girl by Alex Grayson

A lonely man, a widowed woman, a carefree boy, and a broken girl… Can the four come together and help heal each other?

Wicked Truths by L. A. Cotton

The truth won’t fix anything… it’ll only hurt more. Won’t it?

THEN THERE WAS YOU features single parents who weren’t looking–didn’t need anyone–until the right someone came along. Experience the highs and lows of parenthood, love lost and gained, and new beginnings with this collection of stories. They’re sure to leave you with a full heart and a smile on your face.

Proceeds will be donated to a non-profit organization which addresses family homelessness.

I received an ARC for an honest review.

I’m going to do my review like I normally would, it’s just going to be longer as there are 14 stories. The ones I read will be added. I’m a little picky, so if I think I”m not going to like it, then I won’t read it, as I don’t want to penalize the author when I know I won’t like it.

It’s the 3rd in the Swamp Heads series. It has 12 chapters and is about Chester, Serenity and Amelia.

A definite case of instalove.

Chester and Serenity meet and he falls in love with her and her daughter right away. He’s all in from the beginning.

This was a sweet story, I loved it. They were separated by distance for 3 days, but I don’t see it as a real separation as they still talked and weren’t broken up.

Just a short, to the point story with some hot sex scenes. No real drama. I love how Chester was with Amelia. Perfect family together. I loved it. They are engaged at the end. I gave it 4 stars.

It’s the 1st in The Saints series. It has 22 chapters and an epilogue and is about Cora and Riddick.

Starts off with a bang and just keeps going. It actually reads very fast, and it’s very easy to read. Flows very well. I’ve never read this author, but this will not be the last for me.

Very emotional in the beginning. Very violent. They were young and in love, but had to hide it from her brother. He found out and she was forced to leave to protect her baby. They both thought the other was dead.

Twelve years later and they find each other again. Very thankful that we don’t have to wait the full twelve years 🙂

Both have never forgotten or quit loving the other, even with believing the other is dead. They both have been with others as they thought the other was dead, so it didn’t bother me.

This was an amazing story. I absolutely loved it. I really love a story when you can actually feel what the characters are feeling, and they definitely loved the other very much.

The only drama was from their past. I do want to mention that there was talk of rape, but it never happened. Parts were very violent, descriptive.

This was a first by this author for me and I will definitely be reading more. 22 chapters with 300 pages seems like a lot, but it actually flows so well that it reads very fast. There was not one second that I skimmed. Very good read.

Epilogue is only a week later. So that’s the only negative. I like seeing further out, but I’m hoping that we’ll seem them in the rest of the series, which I do plan on getting to eventually.

3.Back to Life by Dani René

I didn’t see where this one was published separately. If you see where it is, please let me know  and I’ll add it.

This has 14 chapters and an epilogue and is about Caleb and Kayla.

In the prologue we see that 4 years ago, Caleb lost his wife and daughter in a car accident. I’m very hesitant on reading dead spouses because it’s hard to not feel like the heroine in the story is 2nd best. In this, we see they have both lost a spouse-she lost hers 4 years ago in Iraq.

They have a lot in common and meet at the school. They both feel a connection.

I really love that they are both upfront and honest about their past loves. Neither have been with anyone else since their spouses died, which I thought was great.

I have to say that it was really good. I do like more steam, but I loved it. It was a very moving story.

No cheating, no drama, no separations. It’s just them learning to move on together. There was no pushing away.

Epilogue is a couple years out. They are engaged and pregnant.

Has 28 chapters and an epilogue and is about Brock and Ripley. They were together for 3 years in high school when something happened and he’s gone for 6 years. He thinks it’s for the best.

We see that he has not been celibate and when he comes back to town, he actually has a girlfriend. He does break up with her and is honest with her.

They both are broken, but he breaks her more when he tells her he doesn’t love her anymore. He does, he just thinks she deserves better.

There is a lot of pulling away, which I really hate. I can understand, but goodness, she was put through the wringer. I really hate that he runs a lot.

Slight ow drama from his ex, just a blip.

Very good read. Just wish they were together more than they were apart. It actually read very easily.

Safety: There is talk of rape, offpage, but it’s not descriptive.

Part of the Bulletproof Butterfly series. Has 10 chapters with an epilogue and is about Opal and Ryan.

They meet and feel an attraction, but she keeps her distance for  about 5 months before anything happens between them.

Lots of pushing away because she’s scared to fall in love with him since he’s leaving.

I do love how much he cares for them. Really with communication was better.

Little drama with her neighbors and some others, but it was over quickly.

Little steam. It was a good story, but it’s really not my type of story when they are apart for most of the story.

No cheating, lots of separation, no ow/om drama. Dead spouse.

Epilogue is 4 months out. They are pregnant. Wish it was further out. This was a good story, but emotional and angsty. ⅗ stars

It has 26 chapters and an epilogue and is about Emerson and Levi.

Levi is a single dad and he meets Emerson when he takes his daughter to the emergency room.

Instaconnection when they meet. I love that we get to see both povs. I love their bantering back and forth and I love that they talk about everything.

Levi has been celibate for many years, he’s always been just about Lily and work. Now, he’s all in with Emerson.

Little blip when they get upset with the other and it hurts the both of them, but they love each other, so it was over quickly.

Little drama when Emerson is kidnapped for 3 days and they talk like they are going to rape her and they do try, but she protects herself until they find her.

It is very emotional, he’s by her side 100%. It was a very good story. I loved it. Definitely feel how much they loved each other.

Great read. No cheating, ow drama- ex comes back and causes the kidnapping, but Emerson never sees her, om drama- bad guys, no separation other than when she was kidnapped for 3 days, but I don’t really count that as it was not voluntary.

Epilogue is 6 months out. They get engaged and are pregnant at the end. I really wish for further out. But, it was still a great read.

It truly kept me interested the whole story. Emotional, few steamy parts. They were perfect together. ⅘

This book is actually a good deal. The ones above are the ones that I liked. I thought it was a good variety. Definitely worth reading. Some I skipped, because they are just not my thing, but you might like them.

I gave it 4 out of 5 stars. Thanks for reading. Hope you check it out.