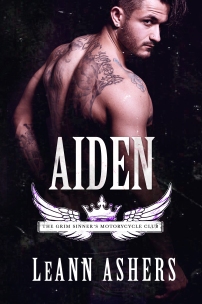 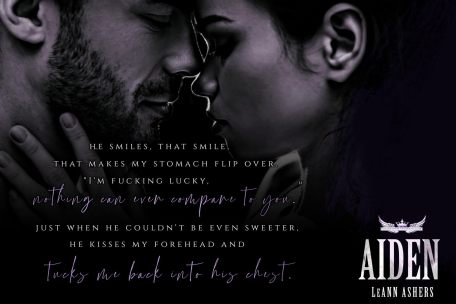 Blurb: From the day she came into my life, I knew I couldn’t walk away from this girl. She was beautiful, a light in this dark and messed up world, but I saw it in her eyes.

I saw the pain she carried, and in that moment, I made a promise.

Her demons would pay. All of them. They didn’t know what I was capable of or what my MC could do.

As I now look down at yet another lifeless body, I smile. I always keep my promises.

One more to go, and he’s the one I really want.

And he knows I’m coming for him…

I received an ARC for an honest review. Huge fan of this author, so very thankful to be able to read her books.

Aiden is the 4th in the Grim Sinners MC series. This story has 14 chapters with an epilogue and is about Aiden and Grace. I do recommend reading in order, even though it can be read as a standalone.

Aiden, he’s an amazing guy. He seen that this baby needed someone to love him, so he volunteered. He took him in and treated him as his own.

I really love getting to see the characters from previous stories and previous series. I also love a story that makes me smile most of the way through and most if not all of Leann Ashers books do that for me.

She makes it very easy to feel each character’s emotions.

Definite instaconnection when they first meet. They realize pretty quickly that they dated when they were 14-15 years old, they were kids and it was for a very short time. It’s been 10 years since they’ve seen each other.

The trafficking story line is continuing from previous stories. Lots of violence, descriptive.

She has dated, but with her past, things didn’t go anywhere. We never hear about his past.

Steam happens past the halfway point and it was just one sex scene, but I definitely didn’t miss it as the story line was very engaging and kept my attention. Lots of things going on with a new drug on the scene and dealing with her family, all while they are making their own family.

Such a great read and a great addition to the story line. I loved it.

Aiden, he was awesome. All in from the very beginning. I love how they were together.

Grace, such a sweetheart, even after her past. She might have had some hesitation in her head, but there was no push/pull and she was all in from the beginning too. I love how they both were with the kids.

No drama in their relationship at all, all outside drama. No cheating, no ow/om drama, no separations once they see each other again-technically, they were apart for 10 years, but they were just kids. Safety gang: She was raped and abused for years. The rape itself is not descriptive.

Epilogue is a few weeks out, 7 months later, then a few years later. They are happily married with Leah, Reid, Alex, Aubree, and Jacob.

I do want to say to make sure you read the author’s note at the end. I love that she can share a little of her story. I love this author so very much, can’t wait for the next.