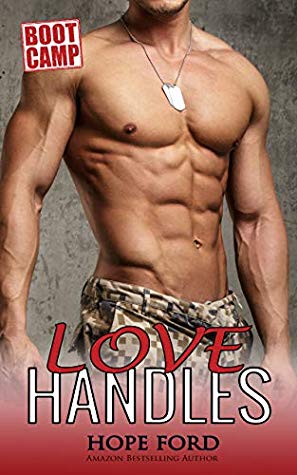 From the first moment I set my eyes on her, I know I have to have her. Too bad she’s on a date with another man. But when things go awry, I’m the first one to step in.

Adam saved me from a bad date… and now he wants more.

But with all my hang-ups, I walk away because he is way too out of my league.

But it turns out, he’s not willing to let me go.

Author Note: Take it easy on Penny. She’s a little insecure (aren’t we all sometimes), but I promise she comes around!

This is a Steamy, Sweet, Short Story Romance! Each one in the series can be read on its own. No Cliffhangers! If you love short romances with insta love, hot love scenes, and a sweet story, then this one is for you.

Love Handles is the 1st in the Boot Camp series. Has 7 chapters with an epilogue and is about Penny and Adam.

They meet when Penny is on a date with someone else. When he first sees her he is all in.

He’s so sweet to her. She is a little down on herself for a little bit.

They are separated for 5 days as she avoids him because she doesn’t think she’s good enough for him after an ex comes up to him.

Couple ow instances, but he didn’t want either of them.

No cheating, ow blips-couple, one is an ex that he hasn’t seen in months, and the other wanted a date, om blip-at the beginning she’s on a date, but it was the only time he was seen, 5 day separation.

Epilogue is a few months down the road. Really wish it was further out. They are engaged and pregnant at the end. I liked it. I gave it 3.5 out of 5 stars. Thanks for reading.