Review: Accepting His Witch’s Sass: Sassy Ever After by Dawn Sullivan 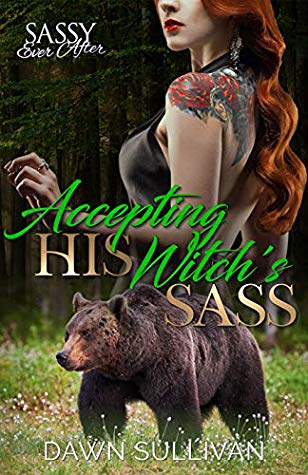 Blurb: He was sexy, broody, and hers, but that didn’t mean Aurora Lewellyn had to like it. A brief glimpse of the future was enough to show her that a mating between the two of them would never work. Not when Noah was unable to accept the part of her that was a witch, one she was unwilling to change, even if she could. She needed her magic. Her charges depended on her. Besides, the stubborn bear should love her for who she was, not what she was.

Noah Channing despised witches. When Fate gave him one as a mate, he knew it must be Her idea of a cruel joke. What had he done to deserve such a punishment? There was no way he could bond with the one thing he hated the most, even if she was a beautiful, feisty redhead who set his blood on fire.

When someone Aurora loves inadvertently brings danger to her door, she knows she will protect the ones she cares for at all costs, including sacrificing her own life in the process if needed. With this newfound threat, Noah begins to see his mate in a different light, but is it too late? Someone else has set their eyes on her, staking his claim. Which one will win?

Accepting His Witch’s Sass is the 3rd in the Sass and Growl series. It has 15 chapters and is about Aurora and Noah. I definitely recommend reading the series in order as we’ve seen both from the 1st story.

We see that they actually meet in the first of the series, but Noah hates witches, and the way he acts when he finds out she’s a witch, hurts her.

Even in the 2nd story, they are not together. Their interactions were funny though.

I have to say that I loved the story line with the demons. The king of them was awesome. I can only hope that Desi gets a story.

This was a great story. They do push/ pull alot, but it fits with the story. Noah, he loved her, he just had to get past his past, I loved him. Steam happens late in the story.

I loved it. I really wish for an epilogue, but I know the story isn’t over as the prince wasn’t found yet, it actually felt unfinished. Can’t wait for the next.

No cheating, no ow drama, om-just the demon who wants her, separations-they are apart for most of all 3 stories. Safety gang: It was mentioned that one of the demons raped women, but it wasn’t descriptive.

They are together and fully mated at the end. I gave it 🌟🌟🌟🌟. Thanks for reading.