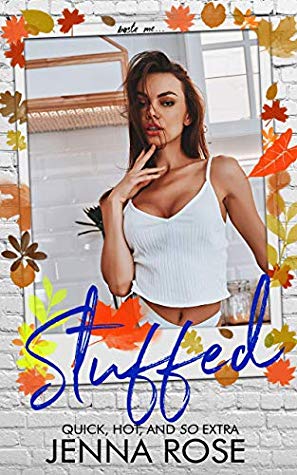 Autumn is Jim’s greatest weakness. You might fantasize about your best friend’s daughter, but you never act on it.

But after spending three years working overseas, Jim comes home to find Autumn has blossomed from the shy, awkward teenager he once knew, into a full blown woman with spicy curves that have him hungry for a lot more than Turkey. Maybe some stuffing?

But Autumn is off-limits. That’s the one line Jim just can’t cross. He’s twice her age and she shouldn’t want him, but she does, and she’s making it very hard to resist.

Stuffed has 13 chapters with an epilogue and is about Jim and Autumn.

Jim is best friend’s with Autumn’s father. He’s been gone for 3 years.

They meet while at the park and it’s instalove for the both of them. Things hit a little bit of a snag when he finds out who she is, so he takes off without saying anything to her.

He doesn’t hesitate for long as she is what he wants. She wants him and she definitely lets him know.

She’s a virgin and he’s been celibate for the 3 years since his divorce.

No drama. Just them getting together. Cute, steamy story. I loved it.

No cheating, no ow/om drama, no separations-the night after he kissed her the first time doesn’t count for me as they weren’t together.

Epilogue is a year out. They are happily married with a baby. I do wish the epilogue was a little further out, but it was still a very good story. I gave it 🌟🌟🌟🌟. Thanks for reading.