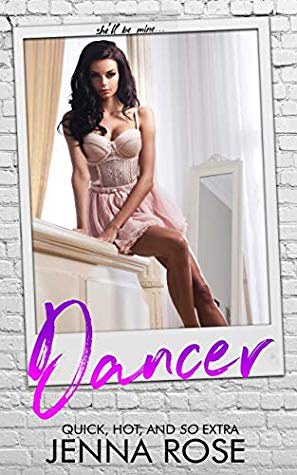 Hope lost her parents a year ago, leaving her with mountains of debt owed to a sleazy “gentlemen’s club” owner, and now it’s time to pay up. Hope is mortified, but things go from bad to worse when notorious crime boss, Brock Williams, arrives at the club and offers to buy her.

Hope is terrified. The man is cruel, fierce and dangerous, right? But then why is he furious at the club owner? Why does he want Hope out of the life? Is there more to this man than the legends portray?

Little does Hope know, she’s stepped into a whole new world and Brock has no intention of losing her. He’s found her princess, and now his only goal is to make her his.

Dancer has 13 chapters with an epilogue and is about Hope and Brock.

Hope and Brock meet right before he sees her at a strip club. They both fall a little bit.

Hope is being forced into paying for her parents debts after losing them.

Brock takes care of her debt.

Everything moves super fast. She’s a virgin and it doesn’t say how long it’s been for him.

I thought it was a good story. Little blip of a misunderstanding, but that was over quickly.

I love that they were both all in.

No cheating, no ow/om drama, no separations-she did run for a sec, but he was right behind her. Reads fast, flows well.

Epilogue is 3 months out. They are engaged. It’s a good story. Wish it was further out. Still good though. I gave it 🌟🌟🌟 ½ . Thanks for reading.