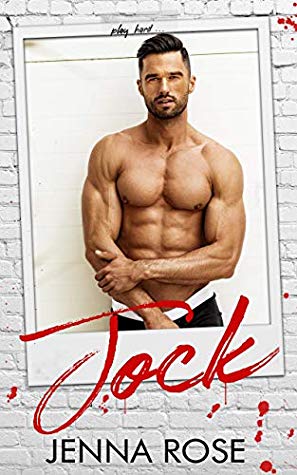 Kylie’s business is under attack. A bitter ex-employee is set on destroying the massage studio she built from the ground up, so when Trent Baron, MVP quarterback for the New England Patriots, offers to hire her as his own personal, full time masseuse, it’s a hard offer to refuse.

But when she sees the look in his eyes, Kylie knows that Trent wants a whole lot more than a professional relationship with her, and Trent isn’t the kind of guy who gives up on what he wants.

Part of Kylie wants to say no and turn down the job. She swore an oath to always keep things professional, and when she sees the way Trent looks at her, she’s not sure if she can…

Jock has 13 chapters with an epilogue and is about Kylie and Trent.

Trent is a quarterback and he meets Kylie when he goes in for a massage. She’s struggling to keep her business after a former employee said she’s doing things she isn’t.

Definite instaconnection when they meet, but Kylie misunderstands him and makes him leave. That’s not stopping him though as he hires her to be his personal masseuse.

She’s a virgin and he’s been celibate for years.

He has someone who’s trying to blackmail him. She talks to Kylie and it hurts her for a minute until she realizes what’s going on.

I loved this story. Lots of steam, which I loved. Just a blip of drama, but it was over quickly.

Trent was all in from the beginning.

No cheating, no ow/om drama-other than the blip who wanted to cause problems, no separations once together.

Epilogue is a few months out. Really wish we could see further out. They are engaged at the end. It was good.I gave it 🌟🌟🌟 ½ . Thanks for reading.