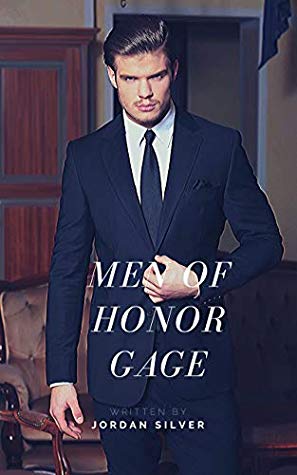 Gage Sievers is a man very much in love with his wife. As a man who ticks all the boxes for every woman’s ideal, he’s had his share of admirers, but none more forceful than the widow whose finances he was in charge of after her elderly husband’s death. Gage had no interest in the woman and thought that like the others before her she’d take a hint and move it along, but he didn’t bank on her persistence. Now he finds himself in the precarious position of having to protect his more timid wife and marriage from the man eating vixen who seems obsessed with him.

Love this author and her alphas.

Men of Honor: Gage has 22 chapters with an epilogue and is about Gage and Holly.

When we start, they are already happily married and very much in love.

She’s a virgin when they first get together. We don’t see very much of them falling in love, but it’s still a great read.

Starts with steamy scenes, which I loved. Very explicit, very steamy, so if you aren’t comfortable reading a story with a lot of sex scenes, this story isn’t for you.

He’s a broker and he’s been having issues with a widow who wants him. He doesn’t want her as he’s very much in love with his wife, but she doesn’t take no for an answer.

She decides to go around him to get to Holly.

I love a possessive, protective alpha. Yes he’s controlling, but I loved it.

Lots of steam. He’s very obsessed with his woman.

I love that he helps her with her self esteem issues.

Donna-other woman-I do like having her POV, even though it’s a little creepy. It was good though.

I loved that even with the other woman drama, he never for once let anything get to Holly. He protected her and helped her get back some of her own. He never once gave Holly a reason to doubt his love for her.

Great read, I thought. Lots of ow drama, but it never hurt their relationship at all. Flowed well. Lots of steam.

No cheating between mcs, ow drama-someone who wants him, no om drama and no separations.

Epilogue is a few months out. They are happily married with twin boys. I do wish it was further out, but still a great read.

I really love this author. I don’t read everything by her as some don’t interest me, but her stories are a guilty pleasure for me. I gave it 🌟🌟🌟🌟. Thanks for reading.