Review: The Heathen by Jenika Snow 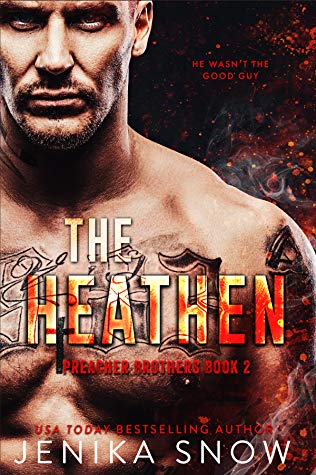 Preacher Brothers. That’s what we were. A unit. The only family I had. I’d never felt love, never felt like I belonged.

I buried what emotions I had lingering deep down, pushed them away until I was this stoic, apathetic machine. It’s how I survived, how I kept my brothers safe. It’s how I showed them I cared, that I wasn’t a machine, a monster.

My history was one of violence, neglected by a parent who only wanted to train his sons to steal, to take from others.

It’s all we knew, so that’s how we continued to live long after the old man died and we were left to make our own lives.

That’s what I was, and I reveled in it.

I’d been such a recluse, taking care of my brothers as they grew up, making sure we had money, food to live. I never wanted or needed a woman… never even knew what it was like to touch, kiss… claim a female.

And that had been fine with me. Until now. Until she came into my life and refused to back down. Until I knew walking away from her would leave a hole in my heart.

But I wasn’t a good man, and Kimber deserved better. I should have left. But I couldn’t.

And I knew one thing for certain… not making her mine would only guarantee my complete ruin.

She was my downfall in the best of ways.

The Heathen is the 2nd in the Preacher Brothers series. It has 17 chapters and is about Cullen and Kimber. I do recommend reading in order as we see Cullen in the first story.

Cullen is one of the brothers. From reading the first, we know that the brothers are thieves, and they aren’t ashamed of that and have no plans to change.

They were all abused as children, but with Cullen being the oldest, he took the most of it, trying to protect his brothers.

In the first, Dom found his one and Cullen was not happy at all. He leaves because he needs a breather and I think he just doesn’t like change and he feels with Amelia there, that he’s losing his brother and doesn’t know how to handle it. He’s so used to taking care and protecting everyone and that’s changing.

I think in the first, I kind of felt that Cullen was heartless and cold. In this one, you get to see the real Cullen and you realize that he feels more than you thought. I love being able to feel the emotions of the characters.

Kimber is a nurse. She has a similar childhood as Cullen as her father was abusive too. She meets Cullen when she finds his car after his accident and she takes care of him.

He is a jerk at first, definitely fights it, but she stands her ground.

Both are virgins. Lots of steam.

This definitely kept my attention from start to finish. I loved that they each felt complete with each other, that they were each other’s one and only.

I loved this one. Really wish we had an epilogue, but I know it’s a continuing storyline.

Just them getting together. They are happily together.

There is a set up for the next story at the end.