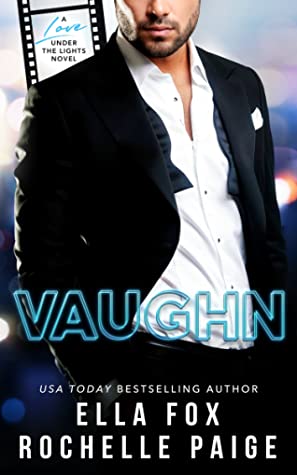 Gorgeous, charming, and funny, Vaughn Corbett rose far above his less than optimal beginning to become a household name. Known for being a dynamic and unflappable interviewer, no one was more surprised than he when he got tongue-tied over a gorgeous blonde in the middle of a live interview.

Allie Henderson was so focused on her career that she rarely thought about men or dating. That all changed when she came across a silver-tongued devil on the red carpet. The moment his deep blue eyes met hers, something inside her shifted.

Allie was there to support her best friend. Vaughn was just doing his job. Neither of them expected the instant, magnetic attraction that couldn’t be denied.

Would a surprise that neither of them planned on end things before they really began?

Vaughn is the 2nd in the Love Under the Lights series. It has 25 chapters with 2 epilogues and is about Allie and Vaughn. It’s good to read the series in order, but you’re not missing anything if you don’t.

Definite instaconnection/instalove when they meet at the Oscars.

I love that they get to know each other first. I loved these 2 together.

Neither are virgins, but it’s been awhile for the both of them. Steam hits later in the story.

Little bit of a misunderstanding and she ignores him for a couple of weeks.

Vaughn was amazing, I just loved him.

Good read. I liked it.

No cheating, ow-just a misunderstanding, no om drama, separation-distance on for a few weeks and then broken up for 2 weeks.

Epilogue is 2 months out, then 6 months later. They are happily married and just giving birth to a little boy. I do wish the epilogue was further out. But, it was still good.