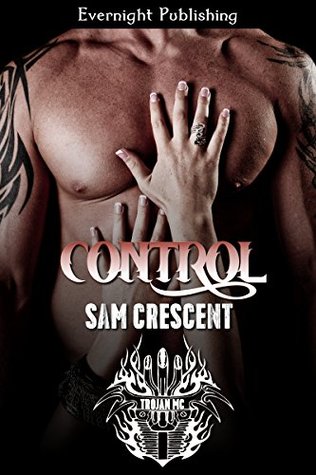 Duke has wanted Holly for a long time but she was too young, too innocent, and he was married. Now, she’s older and he has waited long enough. She is going to be his.

Holly grew up in the MC life. Her father was once president of the Trojans MC before he handed the gavel over to Duke. She refuses to become part of the life like her mother has. Being an old lady is the last thing she wants to become.

He has bided his time and now he will not let her go. Holly is his to control, to fuck, to love. He’ll do everything in his power to claim his woman but what will happen when Holly finds out the truth about the club?

When his ex-wife tries to hurt her, Duke will have to make a choice. Can he kill the mother of his child or will he protect the woman who owns his heart?

Control is the 1st in the Trojans MC series. It has 14 chapters with an epilogue and isa bout Holly and Duke.

They’ve known each other for years. Now he’s the president and divorced and he wants her badly.

Holly really wants nothing to do with the club, but she definitely wants Duke.

He’s been celibate for a year since realizing what she means to him and it’s been a few years for her.

Lots of hot sex scenes. For a little bit she wants to be together in secret.

I did like it. There is just a little ex drama, but it was over quickly and didn’t hurt their relationship at all.

Good read. No cheating between mcs-his ex cheated on him, no om drama, no separations.

Epilogue is a few months down the road. They are married and pregnant. I gave it 🌟🌟🌟½ . Have you read it? What did you think?