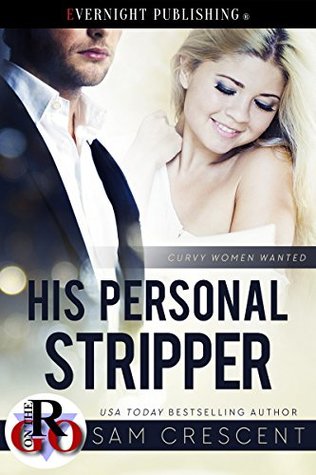 The moment Jack sees her curvy figure and blonde hair, he knows he wants her. Everyone has a price, he just needs to find out what hers is.

Rachel is completely broke and been out of a job for a long time. She’s nearly homeless when Jack propositions her. Being one of the richest men in the world, he’s used to snapping his fingers and getting what he wants—Rachel knows what he wants. He wants sex, and all kinds of dirty things. How can she deny him? She’s broke. Being whatever Jack wants is the only option.

Jack wants everything. Her company, her body, her heart, her soul, but first, he’ll settle for her stripping for him. He loves watching a woman undress and all he wants is to see Rachel’s lush body revealed to him. But what happens when Jack makes it clear he wants more than just a stripper and a fuck? He wants forever—Rachel as his wife, and to put his baby inside her.

From stripping to sex, can it end in love?

His Personal Stripper is part of the Curvy Women Wanted series. Each is a standalone. Has 7 chapters with an epilogue and is about Jack and Rachel.

Jack sees her, wants her and goes about making that happen.

Everything moves super fast. Neither are virgins. Few steamy scenes.

Only a blip of ow drama from someone who wanted Jack, but it was over pretty quickly as he is all about Rachel.

Thought it was cute. I really loved how all in he was. She was hesitant, but they talk over everything which helped her.

Great read. No cheating, ow-see above, no om drama, no separations.

Epilogue is a year out, then a month later. They are happily married with a son. Then it also says, he’s the first of 3. Great story. I gave it 🌟🌟🌟🌟 . Have you read it? What did you think?