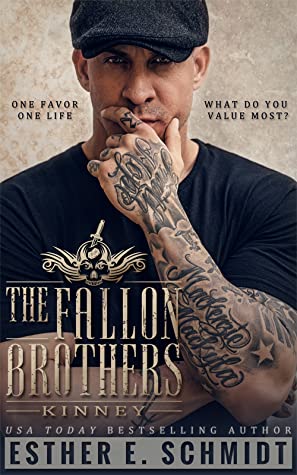 While attempting a rescue, Aspen is caught in a compromising position. Knowing she has to do whatever it takes to finish her mission forces her hand into trading favors with the notorious Kinney Fallon.

Kinney Fallon. MC President. Ruthless. Deadly. Unforgiving. He also never turns his back on a challenge and when he sees Aspen, he instantly knows her worth.

Will doubt interfere with trust? Will loyalty be as tainted as the blood that connects a family? Neither Kinney nor Aspen know how to back down and will fight till their last breath. The question is will they fight together or against each other?

Kinney is the 1st in the new series The Fallon Brothers. It has 12 chapters with an epilogue and is about Kinney and Aspen.

This story sucks you in from the very beginning.

They meet when she goes to rescue her best friend. Her friend was raped off page, not descriptive, but I do like to mention it.

Definite instaconnection when they meet.

Kinney is president of his MC. She’s an ex assassin.

There is lots of descriptive violence. Lots of steam. Lots of outside drama. Kept my attention from the very beginning.

Bantering between the characters was pretty great.

Loved that he was in from the beginning. Loved how Aspen could hold her own. She was awesome.

I loved it actually. The characters and world building were great.

Lots of steam. Neither virgins, and nothing said as to how long it’s been for either of them.

No cheating, no real ow/om drama-blip from a sweetbutt, but over quickly, no separations. Slight push/pull, but it was over quickly.

Epilogue is at 3 months, then at 6 months. They are just getting engaged and pregnant.I really wish we got to see further out, but I”m sure it’s like her other series, and we’ll see them in future stories.

Great read. Can’t wait for the next as there are a lot of great men in this MC.