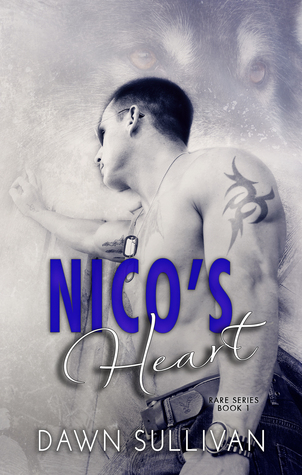 RARE: Rescue and Retrieval Extractions-they took on the missions that no one else wanted and didn’t stop until the job was done.

With her daughter missing and no leads, Jenna asked for help from the only place she could turn to. When RARE agreed to help, they had no idea how complicated one mission would get. Now the race was on to not only save Lily’s life, but the lives of several others. RARE doesn’t back down. RARE doesn’t give up. And when Nico discovers that

Jenna is his mate, he will move heaven and earth to keep both Jenna and Lily safe.

Nico’s Heart is the 1st in the Rare series. Has 38 chapters and is about Jenna and Nico.

Nico is part of the Rare team. Each person on the Rare team has a special ability. Angel is the Alpha of their team. We get different POVs.

Jenna calls for help as her daughter Lily has been taken. Her brother Chase is her alpha.

I do want to mention that the Rare and the White River Wolves series go together. The author has put up the reading order and they really do need to be read in order as the storyline moves from one story to the next, the main characters are the only thing that changes in each.

The world building is amazing and we’ll see all the characters all across both series.

We find out that Chase is actually Angel’s mate, but that will be a story later on.

This world that the author has created, is pretty awesome. You can see it as you read and feel the emotions of the characters.

This is a story about them finding each other. Learning a little about the general and trying to put a stop to it.

Such a great read.

No cheating, no ow/om drama, no separations other than distance, no epilogue.

No epilogue as it’s a continuing storyline.

We have found out that the general has a breeding program where he’s trying to put shifters with people with psychic abilities. Jenna was raped and Lily is a product of that.

Nico doesn’t hesitate at all claiming both Jenna and Lily.

At the end, Jenna and Nico have mated, we know that Chase and Angel are mates-even though she can’t mate right now-will learn more about them over the next few books, Ban and Flame are mates-but she has some healing to do and we know that Phoenix and Serenity are mates-he just has to find her. Can’t wait for more.