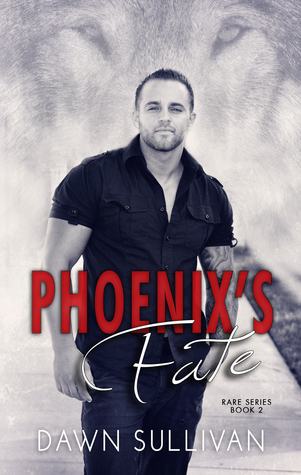 -they took on the missions that

no one else wanted and did not

stop until the job was done

After a long stint in the military, Phoenix hooked up with RARE so he could continue to do what he did best…..Rescuing people and dispensing punishment to those who deserved it. However, lately he had been feeling like something was missing in his life.

Serenity had been running for several years from her pack who wanted to use her for her special healing abilities, and from a psychotic wolf shifter who insisted she was his mate. She had not realized there were worse things to be running from until she was kidnapped by the General’s men. After several months of being held in captivity, a rescue attempt was made by RARE at the facility where she and several other women were being held. During the chaos, Serenity and one of the RARE team members were taken by the General. Once Phoenix finds out Serenity is his mate, nothing will stop him from finding her and freeing her.

When Serenity’s demons from her past come back to haunt her, Phoenix must keep her safe not only from the General, but also from her past if they want a future together.

You definitely want to read these series in the order that they are intended. The author has the order up on her webpage. It’s a continuous storyline with the main characters changing in each.

Phoenix’s Fate is the 2nd in the Rare series. It has 34 chapters with no epilogue-continuous storyline-and it’s about Phoenix and Serenity.

Phoenix is human, but he has special abilities and he’s on the RARE team. He’s also Nico’s best friend.

Serenity is a wolf shifter, telepathic and is a healer.

Just a recap: At the end of Nico’s Heart, Rikki is shot and taken and we also learn that Phoenix’s mate Serenity is still with the general.

This story picks up right where the last ends.

We open with seeing Serenity after she has healed and taken some of Rikki’s pain.

No hesitation between Phoenix and Serenity.

I love this series. Love seeing everyone.

Angel? She may not be making the right decisions where Chase is concerned, but she’s doing it for the right reasons, or she thinks they are the right ones.

A great addition to the storyline.

Definitely keeps the interest from start to finish.

No epilogue as it will continue into the next story. Next up is Josie’s Miracle, which I will be rereading next.

At the end: We know that Rikki is Jeremiah’s mate-she doesn’t know, Trace and Jade are mates-haven’t mated yet as he needs to take care of his past first-Jade is Angel’s daughter that she could never find and not only did the general have Jade for 20 years, he’s had Jinx for 24-the son that Angel didn’t know had lived-Angel does meet him. Flame and Bran still have not mated. The general wants Serenity and Jade back.

Flows well. I really love this series. Couple sex scenes, but it’s later in the story as the romance kind of takes a back burner to the story as a whole.