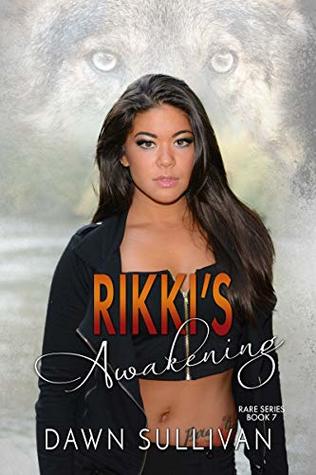 -they took on the missions that

no one else wanted and did not

stop until the job was done

Barely escaping death after her last battle against the General, Rikki Diamond spent the past five months in a coma. Five months of pain, despair, darkness, and most of all… anger. Now that she’s finally returned to the land of the living, she has an uncontrollable rage building inside of her, urging her wolf to take over. Feeling abandoned by her mate when she needed him most, Rikki must fight to keep her emotions in check. A battle she is beginning to feel she will lose. Her mate… her team… no one is safe.

After the General’s men got to his mate, Jeremiah Black decided he was finished watching from the outside and took matters into his own hands. Having gone undercover while his mate lay in a hospital bed, he began working his way up in the ranks, getting deeper and deeper into the General’s organization. He has one goal in mind, and not even the changing circumstances will keep him from completing his mission; destroying the General’s entire organization, even if he has to pick them off one by one.

The tides are changing with the shift of power. Will Rikki and Jeremiah be able to make it out alive? Or will Jeremiah walk into a trap on his first solo mission, leaving Rikki to the anger raging inside of her?

Dawn Sullivan’s RARE Series and White River Wolves Series are intertwined, and meant to be read in the following order:

You definitely want to read these series in the order that they are intended. The author has the order up on her webpage. It’s a continuous storyline with the main characters changing in each.

Rikki’s Awakening is the 7th in the RARE series, but 11th in the reading order. It has 22 chapters and is about Rikki and Jeremiah.

Recap:Jeremiah is a bear shifter and Rikki was human, but to keep her alive, Angel changed her into a wolf shifter. She has been in a coma for 5 months and Jeremiah is working on the inside trying to bring the general down. They both know they are mates. He hasn’t claimed her for years cause he didn’t think she was ready.He just found out in the last story that she was hurt and in the hospital-but he didn’t go to her because she was safe. Ebony killed the general and took over.

At the start of this one, Rikki is waking up and her new wolf wants out. She’s hurting. Thankfully, Jeremiah comes back.

Lots of emotions. You can feel the pain of the characters.

This was mostly Rikki figuring out her wolf and dealing with all that.

No cheating, no ow/om drama, separation by distance only, no epilogue as it’s a continuous story line.

At the end: Bane is Amber’s mate and they are trying to find her. Jinx is still awesome and I can’t wait for his story.