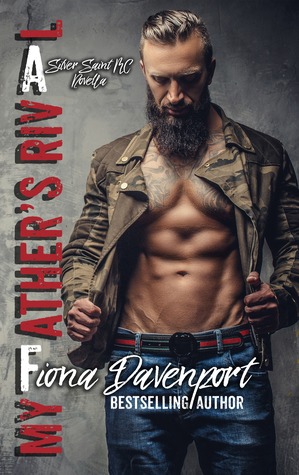 Blurb: Jared “Mac” MacKenzie is used to making tough decisions as the President of the Silver Saints MC. When a member of a rival MC puts one of his brothers in a coma, he’ll do whatever it takes to get answers—including kidnapping Bridget Pierce, their president’s daughter.

My Father’s Rival is the 1st in the Silver Saints MC series. It has 13 chapters and an epilogue and is about Mac and Bridget.

Bridget has had a crush on Mac for a year, but he hasn’t ever seen her except in a picture. Her father is the president of another MC and Mac wants the name of the man who hurt one of his guys after his guy stepped in when this other man was hurting a woman. But, he refused, so Mac wants to take Bridget so her dad will give them what they are asking for.

She pretty much helps him kidnap her. He falls for her right away and she him, because she’s already had a crush on him. He fights the pull to her for a night, but it doesn’t last very long and it’s only cause she’s younger than him.

She’s a virgin and she’s all in with him. He’s been celibate for awhile.

The only other woman drama was from another old lady and that didn’t last very long either.

Everything moves super fast. Mac only lasts a day before he takes and claims her. There was some hot steamy sex scenes that were pretty great.

There was a split second where she misunderstood something and tried to run, but Mac caught her before she made it out of the hall and explained everything. She was hurt, but it was just a blip.

This was such a great story. I loved it. I love that it only takes them a day to actually get together. I love a book where they are together most of the way through instead of waiting over half way to get together.

Epilogue is 11 months out and they have a baby girl. Doesn’t say if they are married or not. Wish it was a little more, but the story was great. I loved it.