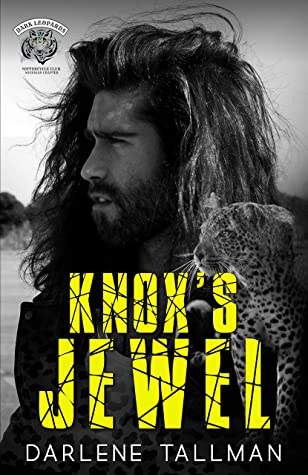 Knox Montague is the President of the West Michigan chapter of the Dark Leopards Motorcycle Club. Tasked with increasing the pipelines that the club has throughout the United States, he oversees a group of shifter brothers that range from owls to otters, as well as his own leopard brethren. Despite the challenges they’re facing trying to find a group of missing women, the quest becomes personal when he touches something that belongs to a woman he’s never met and realizes that the one thing he never thought he’d find may be gone before he can find her – his mate.

Jayda Dyche has been on her own for many years, having left her pride to escape the taunts and bullying she’s endured her whole life. Out one night with friends, she finds herself waking the following day trapped in a hellish nightmare. When her leopard tells her that they were kidnapped for her pelt, she realizes that she may leave this earth without ever knowing what it’s like to have someone love her.

Can Knox find Jayda in time? Or will he forever be alone?

This story originally appeared in The Dark Leopards MC anthology. It has been expanded and has additional content for your reading pleasure!

Knox’s Jewel is a novella and part of the Dark Leopards MC series. I did not read the anthology. It has 11 chapters with an epilogue and is about Knox and Jayda.

They are both leopard shifters.

Knox is the president of the West Michigan chapter. They are looking for missing women.

Jayda is one of the missing. She’s been taken and she can’t shift.

I do have to say that Jayda talking to her leopard was pretty funny, even when they are stressing. Lots of back and forth.

Knox realizes Jayda is his mate when her friend goes to ask him for help in finding her.

We do walk through her memory of her first time with her ex. Over quickly though.

They are both in from the beginning. No pushing away.

I thought it was good. Not very much violence.

It’s just a story of them getting together and them taking care of the ring.

I did like it, just didn’t feel the connection even though both were really sweet and into each other.

Epilogue is a year out. They are happily mated and married with twin girls. Wish it was further out. It was just a set up for Gemma, Wooly and Mammoth’s story.