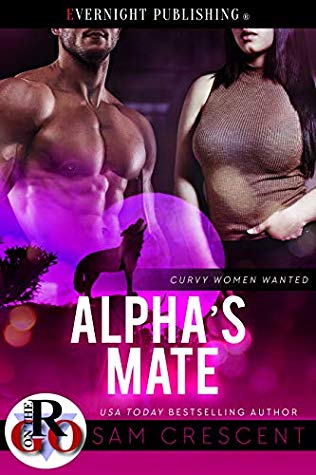 Beast Smith has a secret. He knows who his mate is, but he hasn’t told her, nor has he claimed her. He wants to, more than anything, but Suzy Cain is … weak. He has to protect her, and even if that means staying away from her, he will do it. But being close to her without claiming her is torture. When he catches her alone, he can’t deny himself any longer. He has to have her.

One kiss and Suzy’s body is on fire. She can’t believe this man is hers, so when he summons her to his cabin, she intends to tell him just how wrong he is.

Beast is not wrong. He is the alpha. He’s strong, determined, and won’t take no for an answer—and Suzy wants him more than anything in the world.

The full moon is approaching, and their mating can no longer be hidden. Can Beast protect her from the pack he fears will reject their mating? Whatever happens, he will do what it takes to keep her safe. She is his mate, and it is time the pack knows who they are dealing with.

Alpha’s Mate is part of the Curvy Women Wanted series. Each can be read as a standalone. Has 6 chapters with an epilogue and is about Beast and Suzy.

They are both wolf shifters, however, Suzy can’t shift, so everyone thinks of her as weak, Beast included.

He knows she’s his mate, but he’s taken a while to claim her because he doesn’t want anyone to challenge her and hurt her. He may have been wrong to wait, but I love how much he cares for her.

She’s a virgin and it doesn’t say anything about him not waiting for her. We know that a couple of women in the pack wanted to mate with him, but he’s all about her even though he didn’t claim her for awhile.

Couple parts were steamy, which was really good.

I did love it. Flowed nicely. The only drama was right at the end, but it was over quickly.

No cheating, no om drama, ow-just from a couple pack members, but over quickly, no separations.

Epilogue is 5 years out. They are happily mated with 2 kids. I gave it 🌟🌟🌟½ . Thanks for reading.