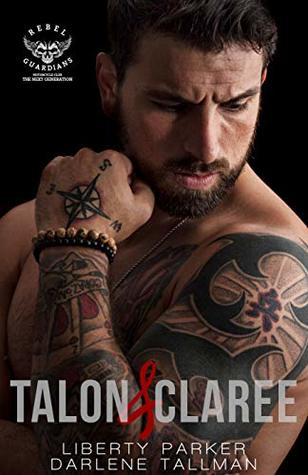 When I came to live with Chief and Trinity as a teenager, I met Talon. He understood what I was feeling and going through and we became best friends. Our friendship grew and despite everyone’s best efforts, we found times to slip away and be together. All was going well until we became a teenage statistic. Now, years later, we’re still together, but his involvement with the club as a newly patched member means we’ve grown apart.

I still love him with everything I have in me, but something’s got to give. I can’t talk about it with my mom because she doesn’t understand, and I’d feel disloyal talking to his mom about him.

The first time I saw Claree, I was hooked. And even though we both knew it was wrong to sneak around, we let our hormones be our guide and well, we got caught. I’ve been prospecting for the Rebel Guardians since I was eighteen and finally earned my patch a few years ago. Life should be good…I’ve got the girl of my dreams, an awesome son, and am in a loving, family-oriented environment. But I’m always gone, learning each of the club’s businesses, and it’s put a strain on our relationship. I’m at the end of my rope and drowning the day I get that phone call only to hear her terror-filled screams before…nothing.

Talon and Claree have hit a rough patch in their young lives. Will the devastating accident be their wake-up call? Can they find their way back to what they once had, or have they lost their chance?

Talon & Claree are part of the Rebel Guardians Next Generation series. While it can be read as a standalone, I do recommend reading Hatch and Chief. It has 18 chapters with an epilogue and is about Claree and Talon.

Talon is Hatch and DJ’s adopted son and Claree is Chief and Trinity’s adopted daughter.

They both had similar backgrounds, which bonded them even closer.

In Chief, we see that they had a connection, but their parents made them wait to date, but they were able to build a great love and friendship.

Absolutely loved that they were both virgins.

I love being able to read everyone’s point of view.

I actually like how the book is separated from the beginning to 3 years later.

Definitely feel the emotions of the characters. Love the world building.

Three years later and they are drifting apart. They still love each other very much, but trying to work and make sure his family is taken care of is not leaving him anytime to be there for them.

I love how they get back to where they need to be, if not better than they were.

Love how not only their families pull together, but also the club, when she’s hurt.

Loved Talon. Loved that Claree acknowledged her faults too.

Epilogue is a year out. They are happily married and have a son and a baby girl. Then there is a little set up for the next story, which I”m reading next.